April 12th 2019, Reykjavik, Iceland. Formed by former CCP executives, 1939 Games’ first title is the WWII-themed collectable card game KARDS, which is coming to PC, Mac and mobile later this year. Select one of five Nations, each with unique tactics, to build a deck and battle against other players on the online-frontline. PC players can start playing today by downloading KARDS on Steam Early Access. Fight them on the beaches, fight them on the landing grounds and fight them on your desktop!

With little interest in the typical fantasy setting, 1939 Games decided to bring a gun to the CCG sword fight. It is a natural fit, as KARDS seamlessly fuses the team’s passions of both WWII and collectable card games. The result is an exciting combat system that employs a range-altering Frontline mechanic with historically accurate units and tactics.

The Early Access versions of KARDS features decks inspired by five Nations’ armies: USA, Britain, Germany, Japan, and the Soviet Union. Each possesses its own distinct playstyle, represented by the different cards that create their forces. These include infantry, armoured vehicles and aircraft along with special ‘orders’. Among these, you can find iconic units such as the American M4 Sherman and British Spitfire Mk Ia. 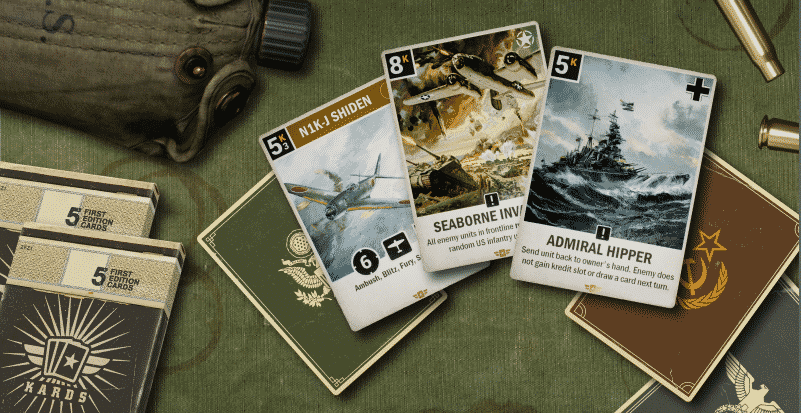 By growing the range of available units through classic booster pack mechanics, players are able to construct decks to suit their play style. Recruiting cards from a single Nation, or by mixing two Nations card sets, KARDS allows players to catch their opponents off-guard with bespoke decks that enable them to blitz the battlefield!

1939 Games was formed by a group of senior ex-CCP executives with extensive experience of AAA titles, including EVE Online. Among their ranks are CCP founder and former-CEO Ivar Kristjansson and Project Lead Gudmundur Kristjansson. Together, they bring more than 25 years knowledge of the game’s industry to KARDS. Utilising all of their experience the team has worked to create a deep, strategic title that will keep CCG fans captivated.

1939 Games was founded by Gudmundur and Ivar Kristjansson, brothers with over 25 years of games industry experience between them. With a shared interest in collectable card games and WWII, the duo wanted a game that combined their passions. When they couldn’t find one, they set out to make it themselves. KARDS is that game, a digital CCG (collectable card game) that uses historical military units as inspiration for its cards. Fusing traditional card game elements with WWII strategy, it is an elegant, action-packed experience that stands apart within the genre.