Scopely Drops the Anvil with the ‘Greatest Game in All World History’: Looney Tunes™️ World of Mayhem

Packed with player vs. player insanity, the mayhem is now available globally as a free download on both iOS via the App Store and Android via Google Play. To view the launch trailer, visit: https://youtu.be/oULfeeRH468.

Looney Tunes™️ World of Mayhem assembles more than 70 iconic Looney Tunes characters; from Bugs Bunny to Duck Dodgers, Wile E. Coyote to Witch Hazel. The zany personalities from Looney Tunes history are available to collect and battle with ridiculous, unique abilities that give players a virtually unlimited number of ways to wage insane prank-wars in a diverse array of game modes. The game gleefully updates the contemporary relevance and humor of Looney Tunes with modern gameplay to delight adult mobile gamers.

“Looney Tunes is an iconic brand that has delivered over 88 years of over-the-top, animated slapstick comedy and we are thrilled to put our own spin on the franchise with Looney Tunes™️ World of Mayhem,” said Jori Pearsall, Senior Vice President of Product and General Manager at Scopely. “The game offers a deep multiplayer RPG combat experience rooted in the timeless humor and insanity that first made Looney Tunes a globally beloved brand, aged-up for the modern fan that craves interactive authenticity.”

Looney Tunes™️ World of Mayhem mashes up the humor and attitude fans love about the classic cartoons with an accessible yet deep build-and-battle game and delivers it in one wacky, ACME-branded package. Players can collect and level-up their favorite Looney Tunes characters (including iconic variants, such as Valkyrie Bugs Bunny), shape the world by building personalized “Toon Towns,” and battle it out with their animated neighbors in prank-filled combat. 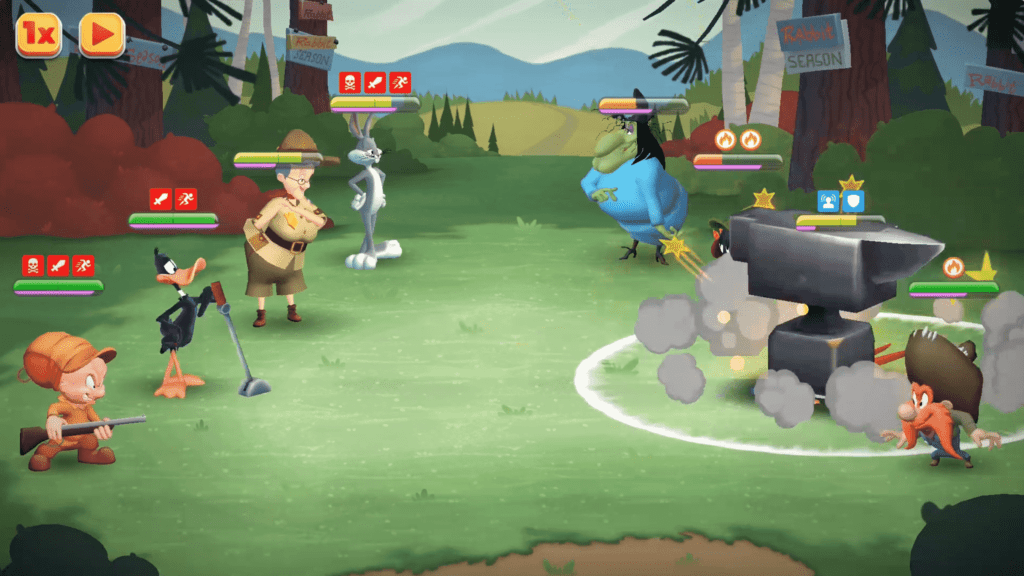 To celebrate the launch of the ‘greatest game in all world history’, beginning at 10:00 a.m. PST today, the world can finally get a behind-the-scenes look into a day in the life of an ACME QA product tester in the World of Mayhem Crushathon. Live from the ACME Anvil Lab, fans can watch as testers drop anvils on everything—from the ridiculous to the more ridiculous—and also engage directly by requesting items to crush. Watch the live stream on Facebook and YouTube beginning at 10:00 a.m. PST until 6:00 p.m. PST. RSVP here: https://bit.ly/2Po5J0r.

Published by Scopely, Looney Tunes™️ World of Mayhem is created and developed in partnership with Aquiris Game Studio.

Scopely is a global interactive entertainment company and leading mobile games publisher. With a diverse portfolio of original and beloved franchises including the award-winning WWE Champions, Walking Dead: Road To Survival™, YAHTZEE® With Buddies and Wheel of Fortune®: Free Play, Scopely games provide immersive experiences for millions of casual and core gamers around the globe.

Founded in 2011, Scopely is home to a proprietary technology platform that creates personalized user experiences and effectively monetizes free-to-play games at scale with multiple franchises each achieving more than $300 million in lifetime revenues.

Recognized in Fast Company’s ‘World’s Most Innovative Companies’ and #2 on Deloitte’s ‘Technology Fast 500’ as one of the fastest-growing companies in North America, Scopely has achieved ten consecutive #1 games in the U.S. and raised more than $250 million in financing from global entertainment and technology investors. Scopely has operations in Los Angeles (HQ) and Barcelona with studios in eight countries across four continents. For more information, visit www.scopely.com.

Warner Bros. Interactive Entertainment, a division of Warner Bros. Home Entertainment, Inc., is a premier worldwide publisher, developer, licensor and distributor of entertainment content for the interactive space across all platforms, including console, handheld, mobile and PC-based gaming for both internal and third party game titles.