4 September 2018, Northampton, UK – Marking the beginning of the new football season, independent developer Go-Play-Games today announced that Club Soccer Director 2019 (CSD 2019), the latest iteration of its hit football management series, has kicked off on The App Store and Google Play.

This latest version features a raft of improvements and innovations over its predecessor including a huge choice of 38 leagues from new countries (including Portugal, The Netherlands, Turkey, Russia, Scotland, Brazil), thousands more players and staff, new revenue opportunities, revamped AI and a new landscape view to work better on tablets.

While most soccer management games are focused on squad-level tactics, Club Soccer Director 2019 offers players in-depth control at the club level. Players assume the role of the football Director in an existing or user-generated club from one of 38 leagues across 14  countries. With the ability to hire and fire at will, wannabe directors can impose their style on the squad by recruiting staff and skillfully negotiating the twice-yearly transfer window to find the best squad members.

As well as staff and squad management, player’s assume full control over their club’s facilities including the stadium, the training ground and the academy – all of which can be upgraded and improved, yielding happier fans, better players, and brighter academy prospects. 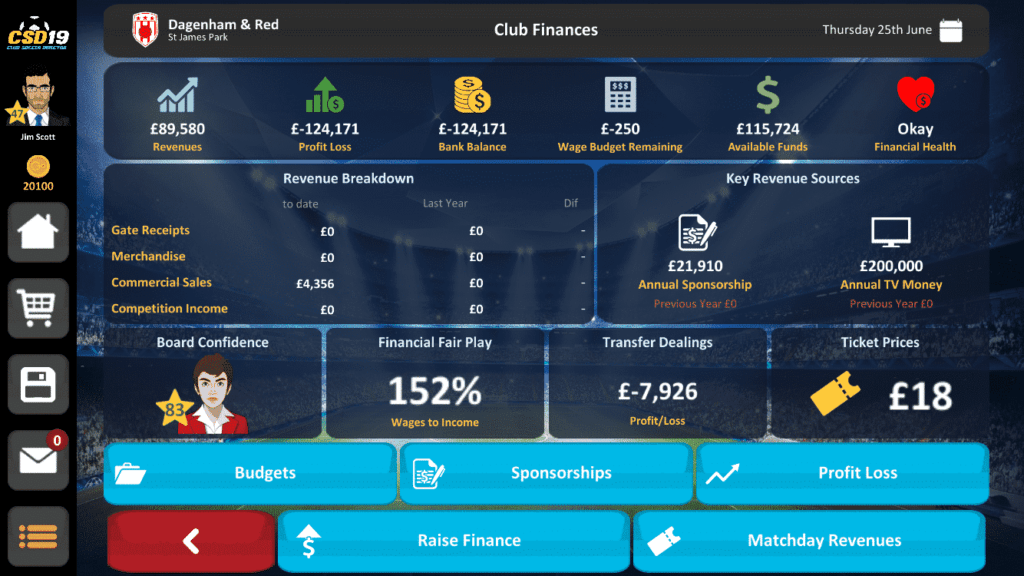 Club Soccer Director 2019 features even more way to generate income through negotiating deals including sponsorship, ticket prices, stadium naming rights and other commercial revenue generating opportunities. Meeting, or exceeding season objectives on a regular basis improves the Director’s reputation, giving players the choice of moving to one of over 800 clubs across 14 countries.

For anyone that likes to tinker with tactics, players have the option to override the manager’s decision on match days, including team lineup, formation and both in and out-of-possession tactics. Players can also dictate to the manager how they want him to play.

Club Soccer Director 2019’s live-action match engine has been overhauled to give a more realistic match-day environment. This includes improved tactical setups from managers in which they adapt to matchday situations. There’s also real-time statistics, individual player overviews and four different game speeds – giving gamers as much or little control as they want. Players can also watch post-match interviews that look and feel like a real-life sports broadcast.

Club Soccer Director 2019 development is being led by Jim Scott, a football manager and coach with over 15 years of experience. As well as being a current football manager, Jim has also 20+ years developing and publishing sports games for console, PC, and mobile platforms.

Club Soccer Director 2019 is available as a free app from the App Store at:

Club Soccer Director 2019 is also available as a free app from Google Play at:

Go Play Games is a publisher and distributor of fun, social, addictive and engaging video games for all digital and mobile platforms. We like to make games that can be enjoyed by all and played with friends either competitively or cooperatively. We are passionate about creating great games and we like to engage with our players to create new games and improve existing ones.

The team at Go Play Games have been developing and publishing video games since 1989 and have many years’ experience in publishing and developing games from home computers, consoles and mobile platforms.

This website uses cookies to improve your experience while you navigate through the website. Out of these, the cookies that are categorized as necessary are stored on your browser as they are essential for the working of basic functionalities of the website. We also use third-party cookies that help us analyze and understand how you use this website. These cookies will be stored in your browser only with your consent. You also have the option to opt-out of these cookies. But opting out of some of these cookies may affect your browsing experience.
Necessary Always Enabled
Necessary cookies are absolutely essential for the website to function properly. These cookies ensure basic functionalities and security features of the website, anonymously.
Functional
Functional cookies help to perform certain functionalities like sharing the content of the website on social media platforms, collect feedbacks, and other third-party features.
Performance
Performance cookies are used to understand and analyze the key performance indexes of the website which helps in delivering a better user experience for the visitors.
Analytics
Analytical cookies are used to understand how visitors interact with the website. These cookies help provide information on metrics the number of visitors, bounce rate, traffic source, etc.
Advertisement
Advertisement cookies are used to provide visitors with relevant ads and marketing campaigns. These cookies track visitors across websites and collect information to provide customized ads.
Others
Other uncategorized cookies are those that are being analyzed and have not been classified into a category as yet.
SAVE & ACCEPT